After its discovery in 1727 and recording, the mosaic was reburied and declared lost. Several oak trees were planted across the site.
But in 1976 the villa was rediscovered by two local archaeologists, Bryn Walters and Bernard Phillips. In April 1978 the then owner of Littlecote, Sir (David) Seton Wills, who had inherited the estate from his father and grandfather, founded a long-term research project, with a team of six full-time staff including a conservator, all led by Bryn Walters. The whole site was painstakingly restored over a 13-year period.

When entrepreneur Peter de Savary bought Littlecote from the Wills family in 1985, he continued the funding until the work was completed in 1991. 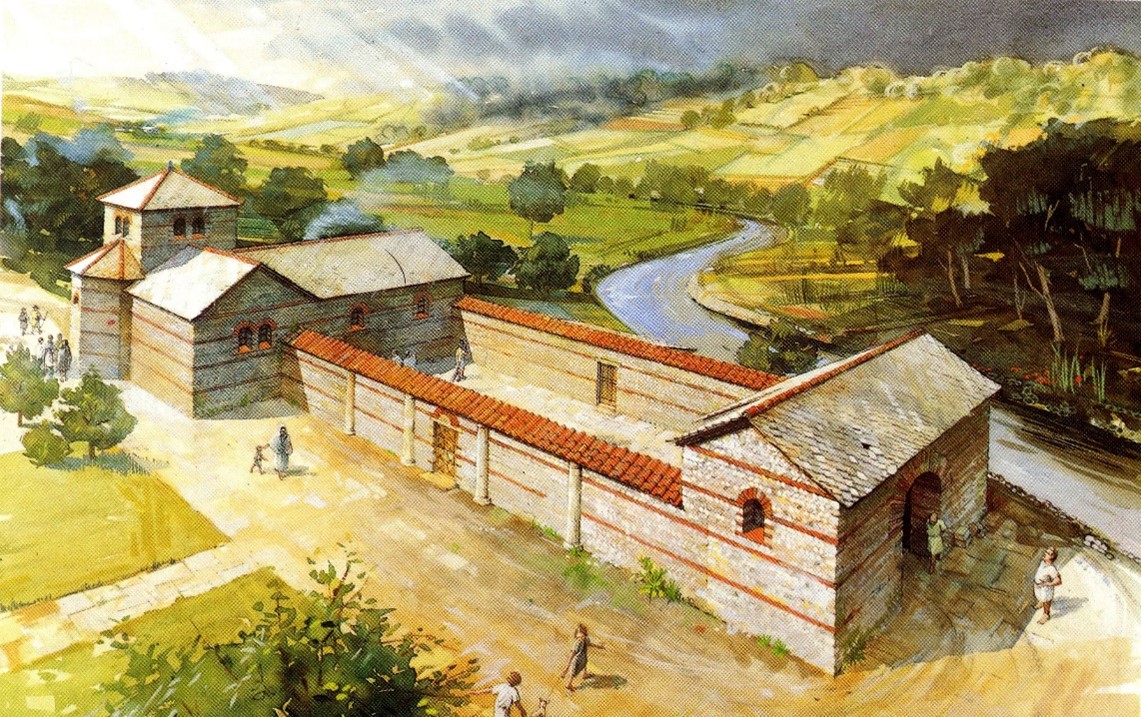 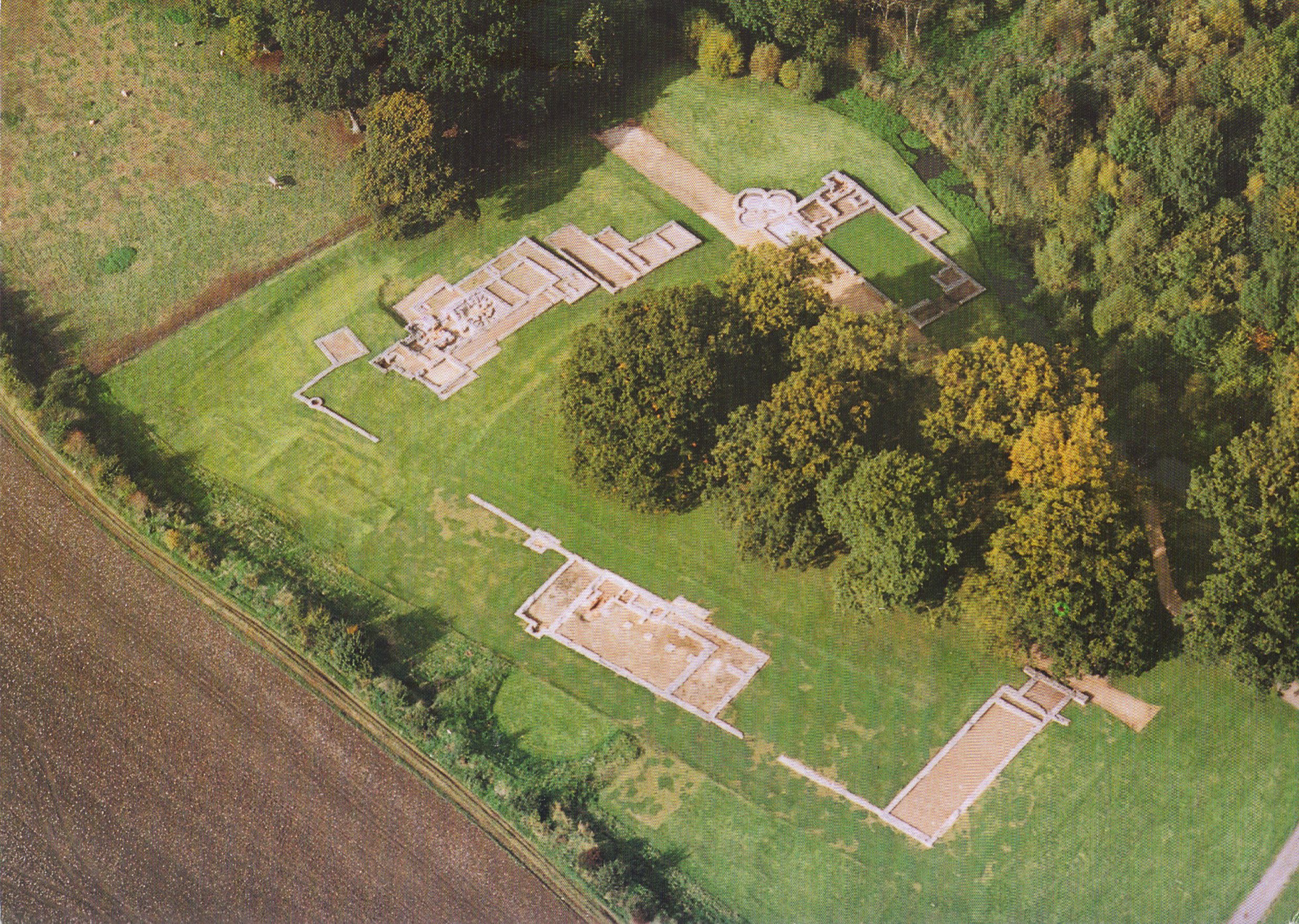 An aerial view of the restored villa, 1991

During an archaeological survey in Littlecote Park in 1976 medieval and Roman debris, notably tesserae, were found around rabbit burrows in a broad area of uneven ground on the south bank of the river Kennet.

A small exploratory cutting was made in June 1977, which identified the site of the Orpheus building.

The area of land to the west of Littlecote House was unproductive, and the owner of the estate, Mr D S Wills (later Sir Seton Wills), made the land available for a long-term archaeological project.

Excavations commenced in May 1978.

The initial findings were recorded in - Archaeological Excavations in Littlecote Park Wiltshire, 1978 - First Interim Report by Bryn Walters and Bernard Phillips, of which the following is a summary.

The initial excavation was focussed on two sites:
1. Site 1 – the southern area, 400 sq metres, including a demolished Roman house extending into Site 2. Some tessellation was found, and three rooms had hypocausts. Pottery from the Neronian/ Flavian period (c. AD 60-90) was found.
2. Site 2 – the northern area, 925 sq metres, including the Orphic Hall and an early Roman road. Immediately to the east of this site was the site of the large cottage shown on a painting of the park around 1710.

The road was provisionally dated to 1st-2nd century. It was six metres wide, with a ditch on its northern side. At a later date a flint-built structure seven metres wide was aligned with the road on its northern side, the foundations of its south wall being laid in the bottom of the ditch. A small bath suite was inserted in the north-west corner. The south-west corner and the wall set into the ditch had been demolished when the Orpheus Hall was added, partly extending over the road, while simultaneously the south wall had been rebuilt extending eastwards from the north-east corner of the Orpheus Hall.

The Orpheus hall was composed of a rectangular hall, 6 metres by 5 metres with an entrance in its north wall, and a western room with apsidal extensions projecting from its south, west and north sides. Externally the apses are polygonal, being formed from five sides of an octagon; internally they are semi-circular.

The south apse is inferior in construction and size compared with the west and north examples. This may have been an error in construction, and must have caused difficulty in springing the internal arches and in laying the mosaic floor. The foundations were remarkably shallow extending on average only 50cms below the level of the mosaic. The underlying ditch on the north side of the road, buried by the construction of the Orpheus hall, eventually caused the western apse and a large proportion of the mosaic to subside. That the ditch was already apparent to the 4th century builders was indicated by an extra thick layer of mortar beneath the mosaic overlying the ditch. 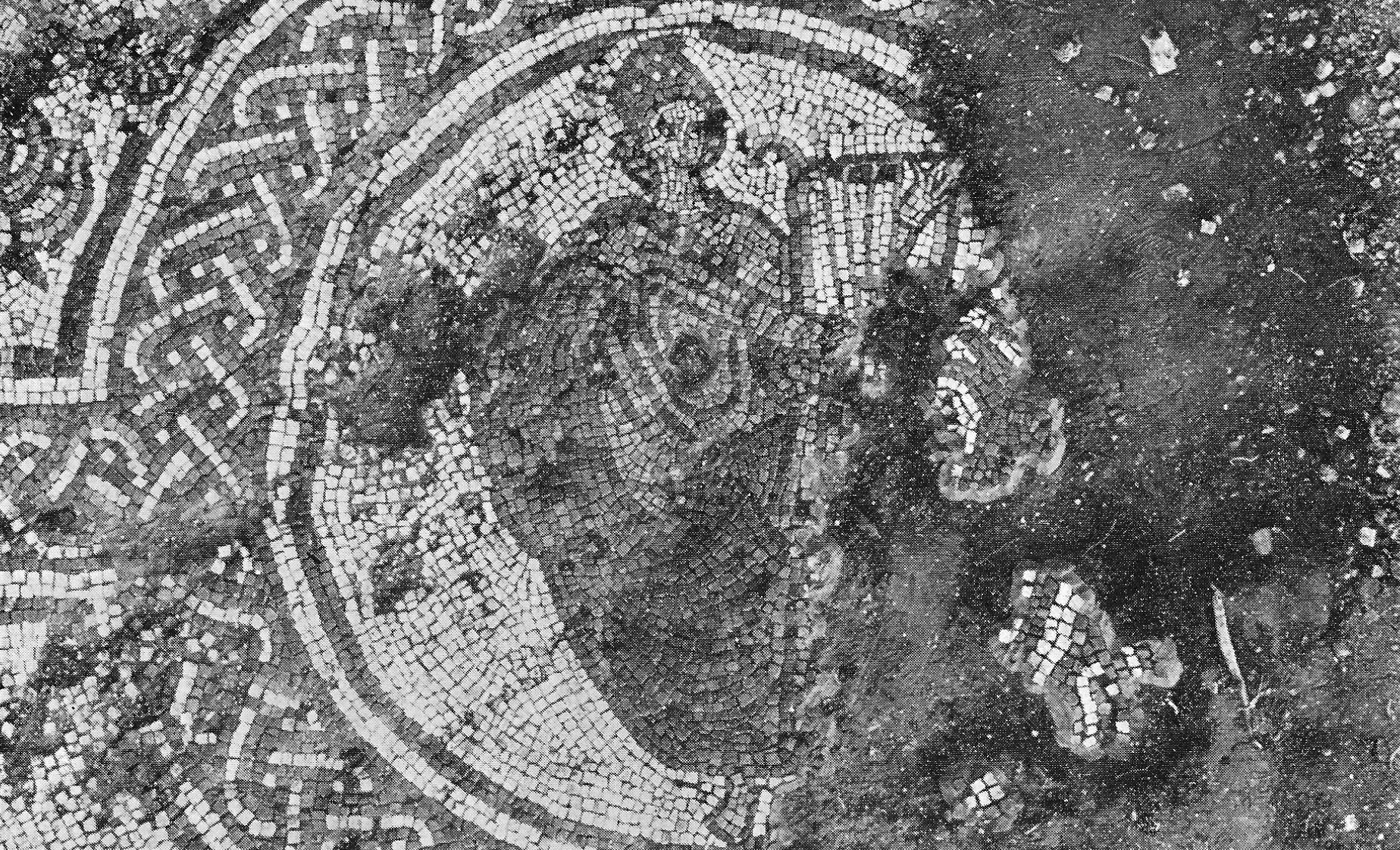 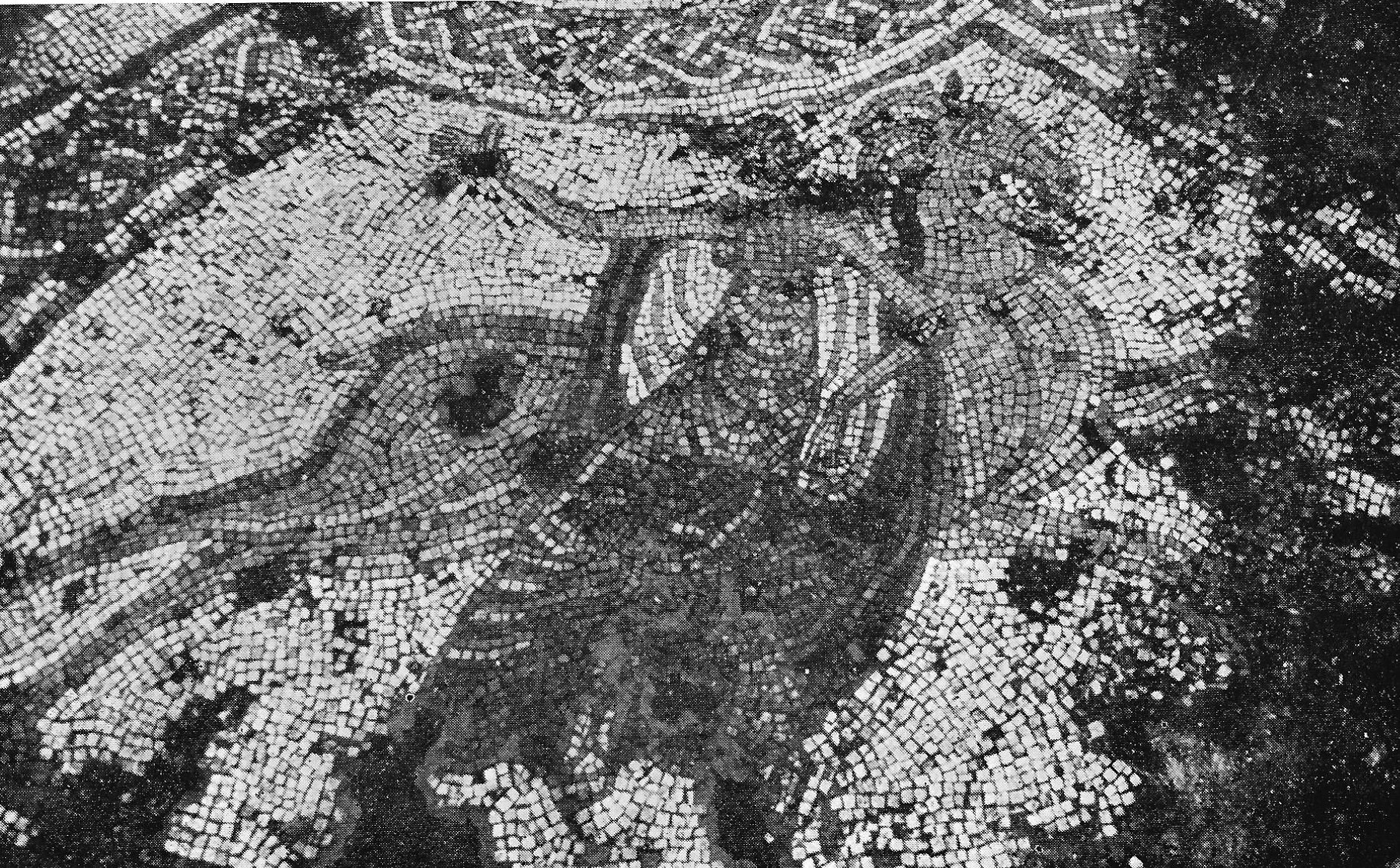 As it was carefully revealed, about 40% of the design of the Orpheus mosaic had survived. It was in a very fragile condition, eroded by root penetration, burrowing animals, worms and, because of its shallow depth, by frost and by flooding. The area of mosaic above the earlier road surface (the southern half of the mosaic) had suffered badly from exposure to the elements in the 18th century.

The mosaic in the northern apse was totally missing, including all trace of mortar bedding. It was intact in 1730 when the embroidery was made, and it is thought that the northern panel may have been removed by Sir Richard Colt-Hoare who hints at an attempted removal in his work 'Ancient Wilts II' (1821, p.117-121).

After total exploration beneath the floor, a fresh foundation was laid and the mosaic ws restored. The work was carried out by Carter Contracting London, and it was formally opened to the public in July 1980. (For more detail on this see the First Interim Report). 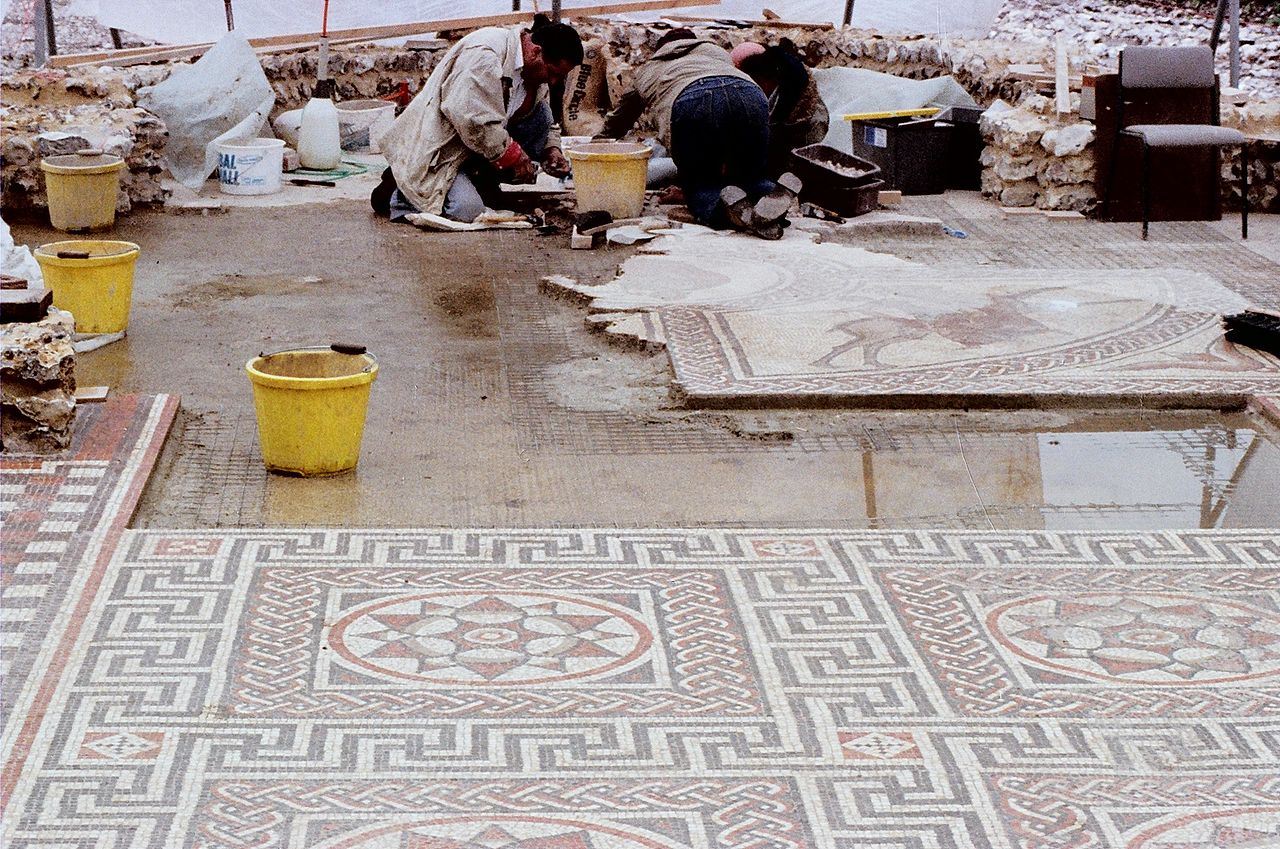