You are in [Places] [Great Estates] [Littlecote House]

To the west of Hungerford is land previously belonging to Littlecote House. This splendid Tudor manor house was a parliamentarian stronghold during the Civil War, and still contains part of a fine collection of Cromwellian armour, much of which was removed to the Royal Armouries Museum at Leeds.

- The Roman villa, with Littlecote House in the background, May 2010

- The Roman villa, with the Orphic building in the background, May 2010

- The Orpheus Mosaic (from overhead).

The present mansion stands on the site of an earlier 13th century medieval house inhabited by the de Calstone family (of Calne, Wiltshire) from around 1290. When William Darrell married Elizabeth de Calstone in 1415, he inherited the 13th century house.

The Tudor house, and the Darrell family:

The present Tudor manor house was mainly built between 1490 and 1520 by Sir George Darrell. It is probably the earliest brick built house in Wiltshire. (The south front, including the Great Hall, was completed in 1592).

Jane Seymour became Henry VIII's third wife when they married on 30 May 1536, soon after Anne Boleyn was beheaded. Jane's romance with King Henry is recorded in one of the stained-glass roundels high in a window in the Great Hall, where Henry and Jane's initials are wired in a lover's knot, over which is a little cupid's head.

After the death of Henry VIII in 1547, Sir Edward Darrell was able to purchase the Manor of Chilton Foliat and Littlecote, but he died soon after in 1549.

He was succeeded at Littlecote by his son William, often referred to as "Wild Darrell" because of his legendary crimes and illicit amours. Wild Darrell was killed in 1589 whilst hunting. (Pauline Mobey emailed Feb 2011 saying that "He was killed in a riding accident on 1 Oct 1589 at a spot known as Darrell's Stile, probably near Shefford Woodlands where the current Hungerford to Wantage road crosses Ermin Street." He was buried 3 Oct 1589 at St Lawrence's Church, Hungerford. [Elizabeth Darrell, wife of Thomas Darrell (William's illegitimate brother, thought to be the son of his father Sir Edward Darrell and his mistress Mary Danyell) was buried 13 Apr 1588, and Richard, son of Thomas Darrell was buried 25 Nov 1588].

The Story of "Wild" Will Darrell:

The last of the Darrell owners is connected with several scandals and the house's resident ghost story. William Darrell's father had left the house to his mistress Mary Danyell, but Darrell was able to recover it when he came of age in 1560. He spent lavishly, left his debts unpaid, and went to law with most of his neighbours, acquiring enemies in the process. He sold or pawned all the family plate as a result of his mode of living.

Some years later, Mother Barnes, a midwife from Great Shefford, recalled being brought blindfold in 1575 to the childbed of a lady, with a gentleman standing by who commanded her to save the life of the mother, but who (as soon as the child was born) threw it into the fire. Barnes did not name or indicate either Darrell or Littlecote, but his enemies quickly ascribed this murder to him.

He was before the Commissioners at Newbury, and he and his servants were charged with murder. He fled to Court, owing the earl of Pembroke £3,000. Darrell's financial troubles increased, and he mortgaged Littlecote, first to Sir Thomas Bromley, and then to Sir John Popham, a relative and close friend. Sir John Popham, then Attorney General, is said to have saved him from prosecution.

It is said that he lived very luxuriously whilst at Court, having fish, game and venison sent to him every day from the Littlecote Estate. He remained in Court until 1st October 1589.

However, on 1st October 1589 he had a riding accident, from which he died. He was buried at St Lawrence Church, Hungerford.

Legend has it that the ghost of the child appeared to him. Darrell is said to haunt the site of his death, known as Darrell's stile (as well as the church at Ramsbury).

Sir John Popham, bought the reversion of Littlecote, and succeeded to it in 1589; the south front of the present Elizabethan brick mansion (including the Great Hall) was completed in 1592

On 2 June 1592, whilst owner of Littlecote, he was appointed Lord Chief Justice of England, a post he held until June 1607. During this time he presided over the trials of Sir Walter Raleigh (1603) and the conspirators of the Gunpowder Plot, including Guy Fawkes (1606). He sentenced Fawkes to death.

The Popham and Leyborne Popham family were to remain Lords of the Manor of Chilton Foliat, thus owning Littlecote Estate and The Bear in Hungerford, for over 300 years. 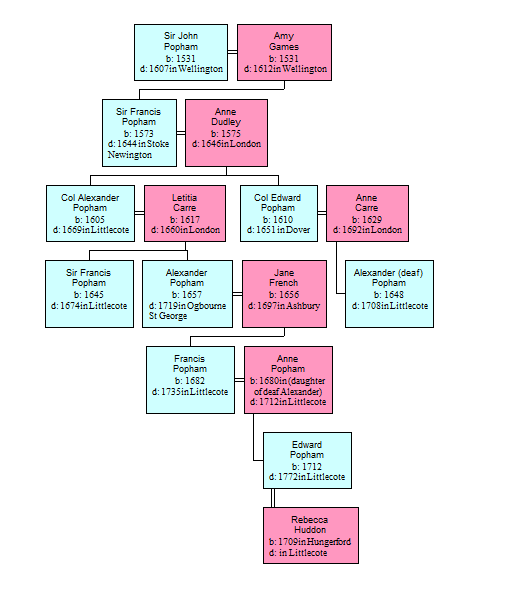 The Popham family tree (by kind permission of Pauline Mobey)

Littlecote and the Civil War:

During the English Civil War, Littlecote was a stronghold of the Parliamentary Army and many relics from the period can be seen in the Great Hall including the uniforms and armour of Roundhead Soldiers. Colonel Alexander Popham, Grandson of the Chief Justice was an opponent of King Charles I and his Littlecote garrison wore the buff coats which form the unique collection currently hanging in the house.

However, Colonel Popham appeared to have changed his allegiance by 1659 when he supported General Monk in the restoration of Charles II and was elected a member of the Council of State which took upon itself the administration of the Government up to the Restoration.

He received a Royal pardon for his involvement in the war and subsequently entertained Charles II to a "costlie dinner" when he visited Littlecote on 21st September 1663 whilst making a Royal Progress from London to Bath. Col Alexander Popham died in 1669 and was buried at Chilton Foliat. He was succeeded by his son and heir, Sir Francis Popham, who died young in 1674. His son Alexander Popham inherited the family estates.

In 1688, William of Orange, on his way from Torbay to London to claim the throne of England, stayed at Littlecote at the time of his meeting with the Commissioners of King James II at The Bear in Hungerford.

Other Royal visitors include:

Pauline Mobey, who has researched the Popham family and all of Littlecote's history, adds: "Only two of the Littlecote branch of the Pophams were ever knighted: Sir Francis b 1573, son of the Judge (knighted at the Battle of Cadiz) and another Sir Francis, b 1645, son of Col Alexander (a purchased knighthood). In 1727 when William George found the Roman mosaic, Littlecote was owned by yet another Francis Popham, b 1682. He married his cousin Anne, daughter of deaf Alexander, and died in 1735. He was succeeded by his son Edward Popham b 1712 who married Rebecca Huddon of Hungerford (not to be confused with the Hiddens, but that's a whole other story!!)."

Towards the end of the 19th century, however, Littlecote was let to a series of tenants, including
- Vernon James Watney, wealthy brewer and antiquarian. He refurbished the Long Gallery and the Chines drawing room
- Leopold and Heinrich Hirsch, both bankers, and
- Gerard Lee Bevan, stockbroker

In 1922 the house was tenanted by the Wills family (the well-known tobacco and cigarette manufacturers). It was Sir Ernest Salter Wills who purchased Littlecote from Hugh Leyborne Popham in 1929.

Littlecote during the Second World War:

Throughout the Second World War, a succession of British and American Troops were stationed at Littlecote:

An insight into life at Littlecote during the Second World War can be gained by the following event. In Jan 2019 John Cowburn emailed from Australia. He was collating his father’s memoirs which included a reference to time he spent living on the Littlecote estate, and referring to a visit by King George VI.

The house provided office space and sleeping quarters for 506th officers with the best rooms being allocated to Col. Robert F. Sink, Regimental Commander and Lt. Col. Charles H. Chase, his executive officer. The colonel used the library as his office and a memorial plaque can now be found in this room . From airfields in this area, including Ramsbury just to the west of here, the Airborne Division took off on D-Day, 6th June 1944, as part of the invasion of Normandy. Easy Company from this Regiment have become famous through the book and TV mini-series "Band of Brothers". All other ranks lived in Nissen huts built alongside the main drive between the house and the east lodge.

Since the Second World War:

Follow this link for a short history of the Wills family, and "Master George" Wills, who inherited Littlecote in 1958.

Around 1980 Seton Wills developed a popular "Frontier City" where wild west scenes were re-enacted. It was a "complete Wild West Town recapturing the American West of the 1880s." For a good description see "Gunfight at the Littlecote Corral" - NWN 22 Mar 1979.

In 1985 Littlecote was sold to the entrepreneur Peter de Savary. See

In Nov 1985, a controversial sale of the contents of Littlecote House was arranged. See

In Sepember 1995 Peter de Savary announced that he wished to sell Littlecote. See

It was closed to the public between 1991-1993, but re-opened in April 1993, with the added attractions of a classic car museum, children's adventure playground, Littlecote "village", working farm, tournament field with jousting and a garden centre. It was marketed as "The Land That's Trapped in Time".

In Dec 1995 it was announced that the exceptional 275-piece Civil War armoury at Littlecote House was to be moved to the Royal Armoury Museum which was being built at Leeds. The Royal Armoury had paid £580,000 for the Littlecote Garrison at the sale in 1985, and they considered it a high priority that it could be displayed to the public. See "Royal Armoury's Littlecote display to move to Leeds", NWN 21 Dec 1995.

In 1996, Warner Holidays acquired the house and estate and now operate it as a large country house hotel and resort (202 rooms in 2011).

The Grade I listed building has a number of magnificent formal rooms. Of special importance are the Great Hall, the Long Gallery, and the Cromwellian Chapel, believed to be the only complete example remaining today.

The Roman Villa and the Orpheus mosaic:

In the grounds are remains of an important group of Roman buildings including an Orpheus mosaic.

The earliest reference to a Roman site at Littlecote was in 1727 when William George, estate steward to Sir Francis Popham, first uncovered the Orpheus mosaic. It was described as "the finest pavement that the sun ever shone upon in England". An engraving and a drawing were made, from which a tapestry was created. This tapestry hung in Littlecote House until 1985, since when it has been in the Ashmolean Library (Museum), Oxford. [Pauline Mobey has contacted the Ashmolean in 2012, who say they have no record of this. The whereabouts of the tapestry are currently unknown].

After its discovery and recording, the mosaic and the villa were reburied, and declared lost.

In 1976 the villa was rediscovered, and in April 1978 the owner Sir Seton Wills founded a long term research project, led by Bryn Walters. Peter de Savary continued his support of the excavation until they were completed in 1991.

A special section of the Virtual Museum is being developed for the Littlecote Roman Villa.

- The Blindfolded Midwife and The Littlecote Ghost [HHA Archive S20]

- "Littlecote is a treasure for visitors and archaeologists", NWN 1979

- "Littlecote Lives and Legends - The Story of a Great Estate and its Famous Families" - by Pauline Mobey, 2011. See www.people-and-places.info.

- Littlecote, including 1st, 2nd and 3rd Interim Reports on the Archaeological Excavatuons, 1978-1982 [HHA Archives A02]