You are in [Themes] [Miscellaneous and unusual oddities] [Wife Selling]

Many of us may have teased our loved ones about trading them in or selling them for a new version, but few people know that the practice of wife selling was once a widespread phenomenon in England.

Between the late 18th and the 19th century in England, around 300 wives were sold, according to newspaper records. This was a common practice during a period when the divorce process was quite difficult, except for those who were really wealthy.

The treatment of a woman as a man's possession was commonplace before the twentieth century, and from medieval times right up to the late 1890s there are recorded cases of wives and widows being auctioned off to the highest bidder. Although the very notion of being bought and sold is enough to send the modern liberated woman reaching for her Valium, it was sometimes a merciful release, as she was at least escaping the unhappy marriage she had got into, (Of course, she might well have been heading straight into another one.)

All the same, the notion is still quite disturbing to the late twentieth century person, with its ominous overtones of slavery, How did this phenomenon come about, and what sort of people actually went to such lengths?

Between 1668 and 1857, anyone who wanted a divorce had to present a bill to Parliament. Needless to say, this was more than a little expensive, and only the well-off could afford to get divorced, One of the options for a poorer person whose married life had become unbearable was to sell his wife, Whilst this was completely against the law, and therefore didn't mark the legal end of the marriage contract to the first husband, the sale was recognised by the wife, seller and buyer as being binding, 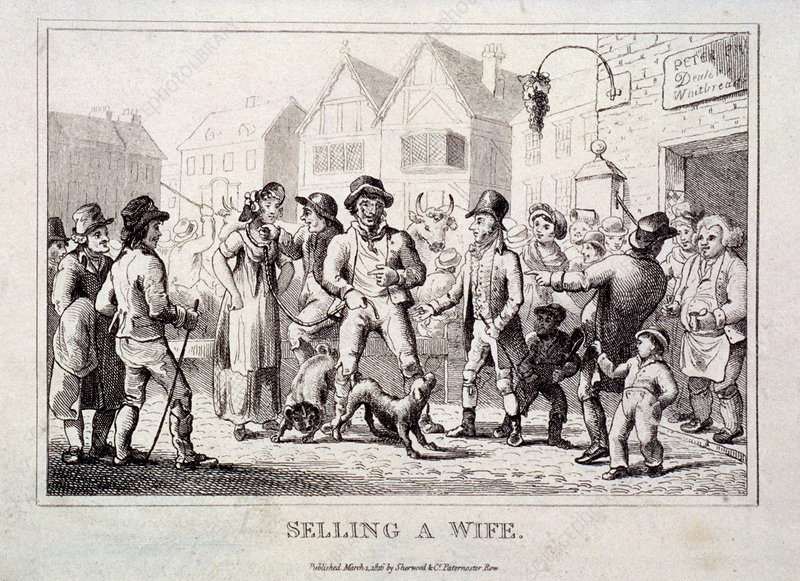 A wife being sold at Smithfield Market, 1816

There was even an accepted procedure for selling a wife. The custom was to lead her to a market place or inn, with a halter around her neck - ribbon and straw are mentioned as typical halters - and then sell the wife off to the highest bidder. The sales were often reported by the press, and these are good places to look up the details of an event. There are cases recorded in The Times' in 1796, and the 'Daily Mail' in 1899.

If you think that last date seems uncomfortably close to the 'civilised' twentieth century, then you're right. Despite the fact that after 1857 divorces could he settled relatively easily in the civil courts, sales still continued to be reported up to fifty years later. Some are noted as late as 1894 in Durham, 1882 in Derby, and 1887 in Sheffield, Incredibly, in 1896 one man even used the excuse of having sold his wife as his defence against the charge of bigamy! It seems amazing that this was occurring at a time when the suffragette movement was gaining support, and when the Lord Chancellor in 1891 had ruled that no law gave a husband dominion over his wife.

Conan Doyle, Thomas Hardy and Hugh Walpole all bring sales of wives into their writings The subject has not been written about much in English history, but as the main source is newspapers, the information becomes more readily available as papers become more widespread. As well as the press, one very unusual entry in a parish register mentions the custom, though it seems to be unique in this. The baptism in question, which took place at Purleigh, Essex, in 1782, is recorded as; “1782 September 15th baptized Amie daughter of Moses Stebbin by a bought wife delivered to him in a halter.

The practice was not even confined to rural country districts, where ignorance of the law might be pleaded. In 1823 it was noted that the current price at the Smithfield Market in London was "22 shillings, having recently doubled". Nor were you safe if you were a gentlewoman. The 'Roll of Widows and Orphans' in 1185 was a list of all eligible widows, that read rather like an extensive menu for the rich man to pick and choose from.

If your deceased husband had owned property, then you as a widow would inherit about a third of his wealth, so becoming hot property yourself. The man who offered the most money to the King was entitled to 'take you away'.

In 1258 the marriage of Beatrice. widow of William le Curimer, is noted as "worth only 100 shillings, because she is much burdened with debts and the care of her boys, and moreover is beyond the age of childbearing, and great poverty threatens her. "Personality or compatibility seemed to matter little where goods and chattels were concerned.

And supposing you didn't want to be 'taken away’? Well, if you yourself were able to match the highest price offered for you by a suitor, you could stay single. Of course, every time someone else came along to request your hand in marriage, you would have to pay yet another ruinous fine. And if you wanted to marry someone of your own choice, you had to pay yet another fine. Life could be extraordinarily tedious for the medieval widow.

As far as family history is concerned, the sales are sometimes mentioned in the records, meaning there are obviously going to be a few surprises in store for those whose ancestors either bought or sold a wife. No doubt there were plenty of sales and trades which went unreported, as most people would have preferred to keep such a thing quite private. As a result, it’s quite hard to tell just how common a practice this was but from what little evidence remains of this bizarre trade, it’s safe to say that it’s one old custom that’s better left unrevived.