You are in [Themes] [Plagues and Pandemics]

Plague victims being buried in pits in London.

Plagues were common occurrences in medieval and early modern England. They struck London every 20 years or so, and even when there wasn’t a major outbreak the disease was bubbling under the surface, waiting for the right conditions to rear its ugly head again.

The two worst outbreaks of plague in London were the Black Death in 1348 and the Great Plague in 1665. Even in the modern era, between 1-17 (average 7) cases occure each year in the USA, normally cured by antibiotic treatment.

Plague is now known to be caused by the bacterium Yersinia pestis (previously know as Pasteurella pestis) and to be carried from person to person on body lice and fleas. (The traditional explanation of it being passed by rat fleas is now discredited).

The first sign of bubonic plague is painful swellings in the armpits and groin, some as big as eggs (‘bubonic’ is derived from the Greek word for groin). Gangrene is another common symptom, killing skin tissue and turning fingers, toes, lips and noses black. This is accompanied by a high fever and often a rash, vomiting, and coughing up blood.

If you caught the plague, things were unsurprisingly not looking great. About 70% of those infected died, most within the space of a week. London’s churchyards couldn’t cope with the demand for burial space, and so pits were dug across the city and its surrounding areas to bury the infected dead as quickly as possible.  There are potentially hundreds of pits a few metres under modern London’s roads and parks, including Charterhouse Square.

The population of England at the time of the Domesday Survey (1086) is believed to have been 1-2 million and it grew steadily for 200 years to around 4-6 million by 1300.

In the 14th century, however, there was a series of problems resulting in major loss of life:

- Around the turn of that century (c.1300) there was a period of food shortage and inflation, followed by several years of very cold wet weather (1310-1316).

- Between 1316-18 there was widespread sickness in oxen, possibly "foot and mouth" disease, which resulted in the "Great Famine", when 10-25% of the population died.

But there was worse to come. In 1348 the Great Pestilence (later known as the "Black Death") began. It is thought to have originated in Central Asia in 1331, entered England in Weymouth (some accounts say Bristol was the first affected) in June 1348 and spread across the country, reaching London by the autumn. Around 60% of Londoners died in nine months. From London, the Black Death spread across the whole country - causing huge loss of life, with an estimated 30%-50% of the population dying, making it one of the deadliest plague pandemics in human history.

There were further outbreaks of plague through the 14th century. By 1400 the population of England had probably dropped to around 2-3 million people.

We have no firm data on the ravages of the Black Death on Hungerford, but there are pointers. Hungerford is a good example of a “planted town” with its north-south “alta strata” (now High Street) and its back lanes (now Fairview Road and Prospect Road), with the resulting residential areas divided into deep narrow burgage plots. We think that all this had been set out in the mid-13th century (c.1250) when Simon de Montfort was Lord of the Manor.
The plan allowed for about 130 burgage plots (about 65 on each side of the High Street), but records show that many of the plots at the southern end remained unused until the Victorian period. The Black Death of 1349-50, as well as later outbreaks of the plague probably delayed the expansion of the planned town. It was only with the prosperity of the coaching period 450 years later that all the available plots came into use.

Recovery was slow after the Black Death wiped out around half of Europe’s population. Plagues continued to punctuate life between the fourteenth and seventeenth centuries, and by 1665 it was back with a vengeance in the narrow, crowded and filthy London streets. This time it killed around 100,000 Londoners over 7 months; 15% of the city’s population. It was England’s last major outbreak of plague.

As with the Black Death over 300 years earlier, nobody understood what was causing this deadly disease to take hold. Bad air, the weather and dogs and cats (which were slaughtered) were all blamed, and it would be another 300 years until the cause was discovered. By the summer of 1665, those who could afford it were fleeing the city. Plague doctors, who often had no formal medical training, were diagnosing victims.

The Lord Mayor of London ordered that red crosses be painted on plague victims’ doors as a warning, with the words ‘Lord have mercy upon us’. Drivers of dead carts roamed the streets calling ‘bring out your dead’. The bodies were dumped in pits across the city during the night at first, in an attempt to limit public alarm. 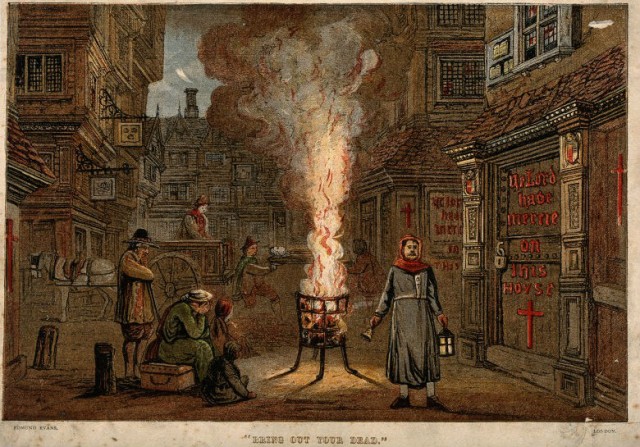 At night you were instructed to "Bring out your dead"

The Spanish flu, also known as the 1918 flu pandemic, was an unusually deadly influenza pandemic caused by the H1N1 influenza A virus. Lasting from February 1918 to April 1920, it infected 500 million people – about a third of the world's population at the time – in four successive waves. The death toll is typically estimated to have been somewhere between 17 million and 50 million, and possibly as high as 100 million, making it one of the deadliest pandemics in human history.

In the 1980s and early 1990s, the outbreak of HIV and AIDS swept across the United States and rest of the world, though the disease originated decades earlier. Today, more than 70 million people have been infected with HIV and about 35 million have died from AIDS since the start of the pandemic.

SARS developed in the Far East in 2002. It was found to be caused by a coronovirus - SARS-CoV or SARS-CoV-1.

SARS was a relatively rare disease; by the end of the epidemic in June 2003, the incidence was 8,422 cases with a case fatality rate (CFR) of 11%. No cases of SARS-CoV have been reported worldwide since 2004.

MERS is another coronovirus illness, specifically caused by MERS-CoV. It began in Jeddah, Saudi Arabia in June 2012, and appears to have spread from bats and camels. It has a fatality rate of about 35% and work is ongoing to develop a specific vaccine.

There is a separate article on the Covid-19 pandemic.