Accurate "town clocks" were important in the days before many private homes had longcase clocks. They were often sited on church towers, but as Hungerford's Parish Church is well away from the town centre, the town clock in Hungerford was sited on the town hall. 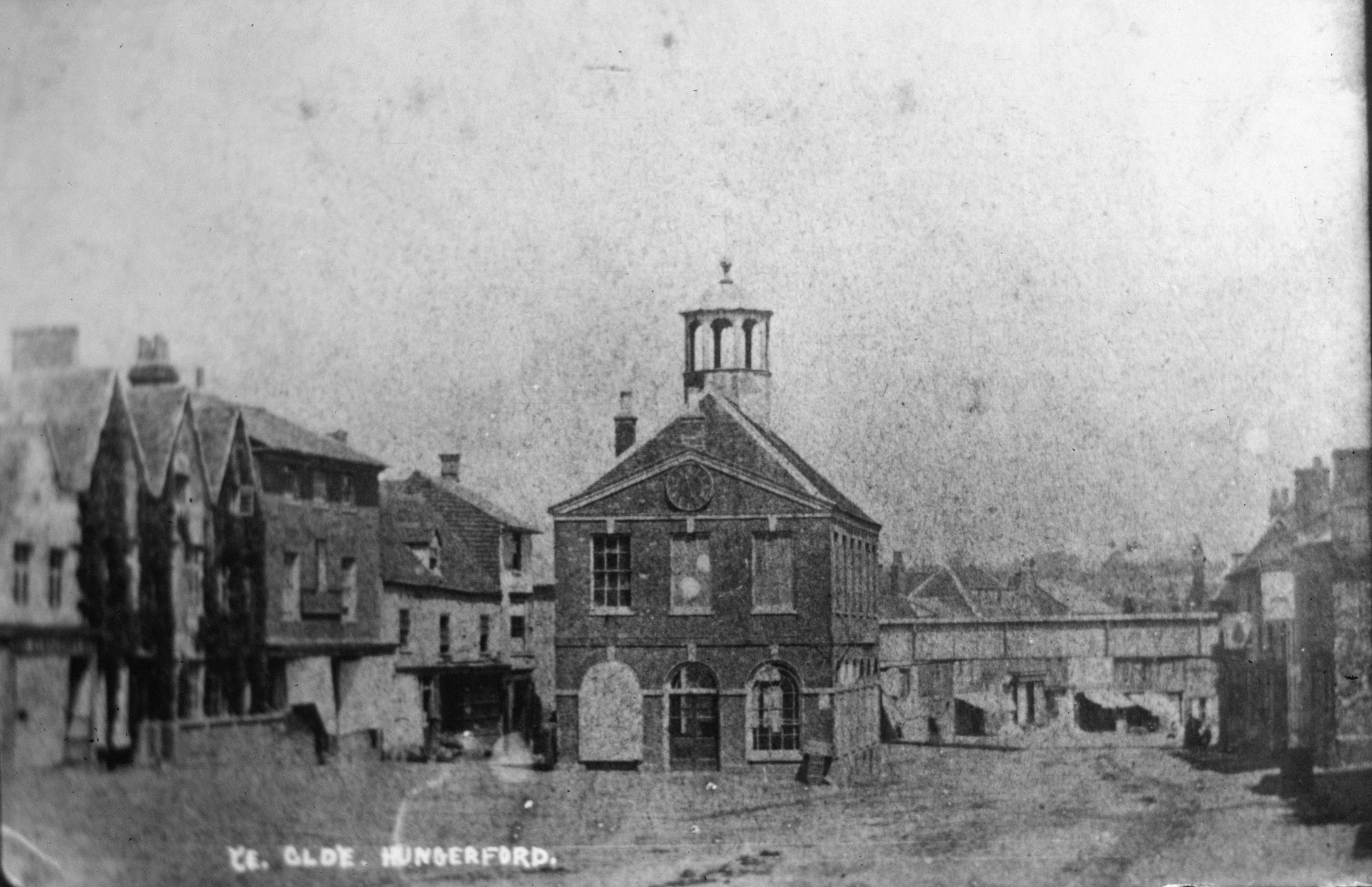 From a Carte de Visite by E T Brooks of Newbury (dated in pencil on the back "1865", re-published by Albert Parsons, as part of his "Ye Olde Hungerford" series. Note the town hall clock on the south gable.

In addition to town clocks, it became common for coaching inns to install acccurate pendulum clocks. One such is the magnificent "Tavern" clock in the Bear Hotel - an interesting and early example.

The Bear Inn was a key hostelry on this coaching road, and they installed a very accurate pendulum clock in 1735. It is still there to this day. 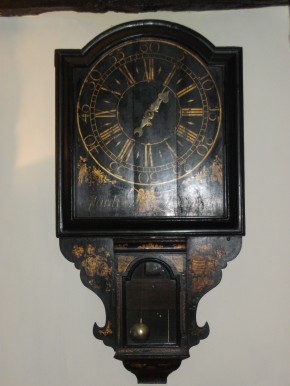 The Bear's famous "Tavern" Clock, made by The Marsh family of Highworth in the 1735

The clock was made by the Marsh family of Highworth.

The key member of the Marsh family had been Ono Marsh, but he had died in 1733, and his widow Jane continued the business for two years. This must have been one of the last clocks made by them. 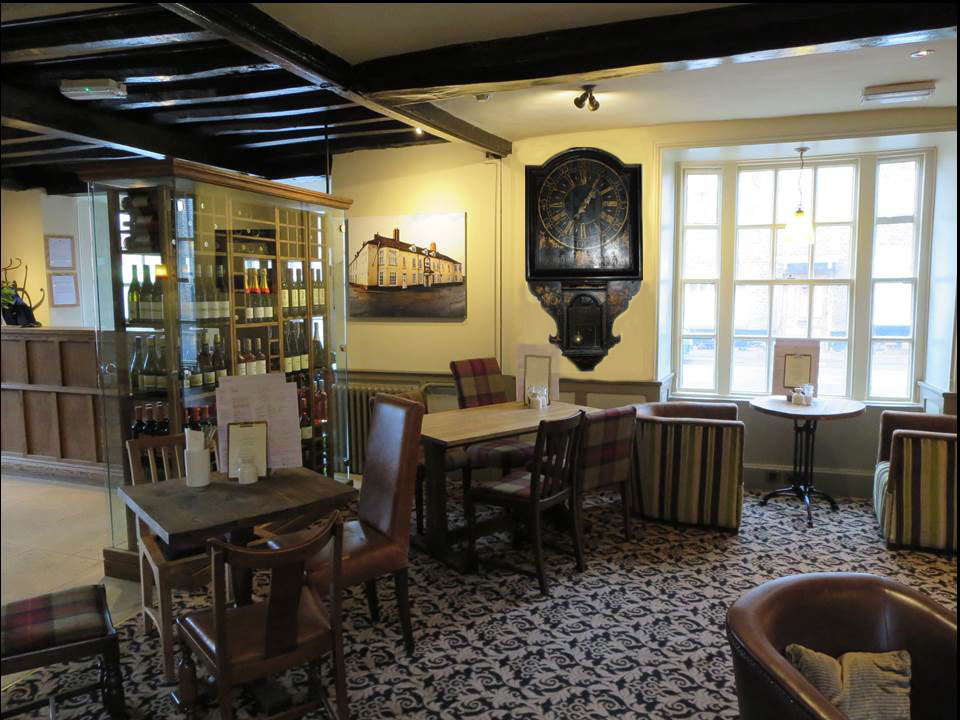 These "tavern" clocks are often wrongly known as "Act of Parliament" (or “Parliament”) clocks. The large clocks in inns had to be kept for the timing of coaches and were later (though incorrectly) said to have been developed as a response to this tax.

The term came about (long after these clocks were already in existence) because, in 1797, a quarterly tax on all clocks was introduced by Prime Minister William Pitt the Younger to raise desperately needed money to help fund the Napoleonic war. This was one of the many taxes brought in at this time.

During the last three decades of the eighteenth century, the price of watches declined and consequently they increased in popularity. William Pitt the Younger, the Prime Minister and Chancellor of the Exchequer, decided to tax watches and clocks. The Act (The Duties on Clocks and Watches Act 1797 (38 Geo. III, c. 108)) taxed gold watches were taxed at 10s each, watches of other metals at 2s 6d, and clocks at 5s. The Act also required makers or dealers in watches and clocks to purchase an annual license, costing 2s. 6d. in London and 1 shilling elsewhere.

Faced with the demands of financing the ongoing wars with France, Pitt had already imposed many new taxes, including duties on tea, spirits, glass windows and horses, and would go on to introduce the nation’s first income tax in 1798. Few of these measures, however, were as instantly unpopular (and impractical) as the tax on telling the time.

The Government justified the tax by arguing that people wealthy enough to afford a clock or watch would be well able to pay the tax, because clocks and watches ‘were certainly articles of convenience, but they were also articles of luxury’.

Householders were required, under threat of dire penalties, to submit to the authorities lists of clocks and watches in their possession. Unsurprisingly, the tax proved totally unworkable. Pitt was wrong in thinking clock and watch ownership a sign of wealth: as society had become increasingly regulated by time in the later eighteenth century the ownership of watches penetrated far into the middle class, while clocks could be found even in poorer homes (although clocks with a value of less than £1 were exempt from duty, giving some protection to poorer householders).

The tax was universally unpopular and its operation was undermined from the start. Clock- and watch-owners hid their timepieces; those with gold watches commonly swapped the cases for silver or base metal; and people ceased to buy new clocks and watches, throwing the clockmaking industry into crisis and economic depression.

The outcry against the measure, and its obvious ineffectiveness, forced the Government to retreat.

The tax nearly ruined the manufacturers of clocks and watches, with demand for their products declining to such an extent that within a year the manufacture of these items diminished by half. It also caused thousands of workers employed in these trades to emigrate.

This failed Act did have one lasting consequence. As people concealed the clocks in their houses and ceased to carry watches with them, clocks quickly appeared on buildings and in public places to tell the time for a society which, with its bureaucracies, factories and complex business and social activities, now depended upon accurate timekeeping for the structure of its daily life. These timepieces, usually large in size and of relatively plain design, were known as ‘Act of Parliament Clocks’. Tavern owners were particularly quick to see a potential advantage in providing such clocks inside their establishments, so that anyone wishing to know the time would come into the bar and, with any luck, become a customer; thus the alternative and more accurate name of ‘Tavern Clock’ is often applied to these clocks. Tavern clocks were of great value for communities in which inns were social centres performing many public roles such as acting as venues for political meetings and auction sales. They were particularly important for coaching inns with their stagecoach services operating to regular timetables.

For a society in which, for generations, the only public clocks had been those sometimes to be found in church towers, the Tavern Clock represented a considerable expansion of the public availability of accurate timekeeping.

The clock was nearly sold!

The magnificent "Tavern" clock in the Bear Hotel was removed when Greene King bought the hotel in 2013, and offered for sale at Woolley & Wallis Salerooms, Salisbury on 19 Feb 2014.

The accompanying description says: "By Marsh of Highworth. An early tavern clock with rectangular shield dial, gilt Roman hours and outer Arabic minute ring with diamond half hour marks, signed beneath the chapter ring Marsh Highworth either side of a gilt painted Father Time type figure, the large ears attached to the trunk decorated with barrels and vine leaves, the door now glazed, cushion base, the rectangular plated movement with four ringed pillars, the four wheel train with large diameter barrel wheel, brass hands with counter balanced minute, circa 1735, 62in (157cm) high.

Provenance: Recently removed from the Bear Hotel, Hungerford, where it reputedly has been since new. The clock is recorded and discussed by Gratto, Martin 'The Tavern Clock' p. 147.

Ono Marsh of Highworth died in 1733. The business was continued by his widow Jane until 1735, possibly making this one of the last clocks by the Marsh family ever to be made. The clock still retains its original movement and a rare illustration of Old Father Time."

For more on the Marsh family of clockmakers, Highworth, see the Brian Loomes website.

The "tavern" clock at The Bear was an early example, and was special because it is thought never to have left The Bear.

Where is it now?

When the clock was returned to The Bear from the auction house, and realising its heritage significance, Greene King decided to place it in a display cabinet which had previously been used to house the historic stuffed Bear, that had befallen into very poor condition. 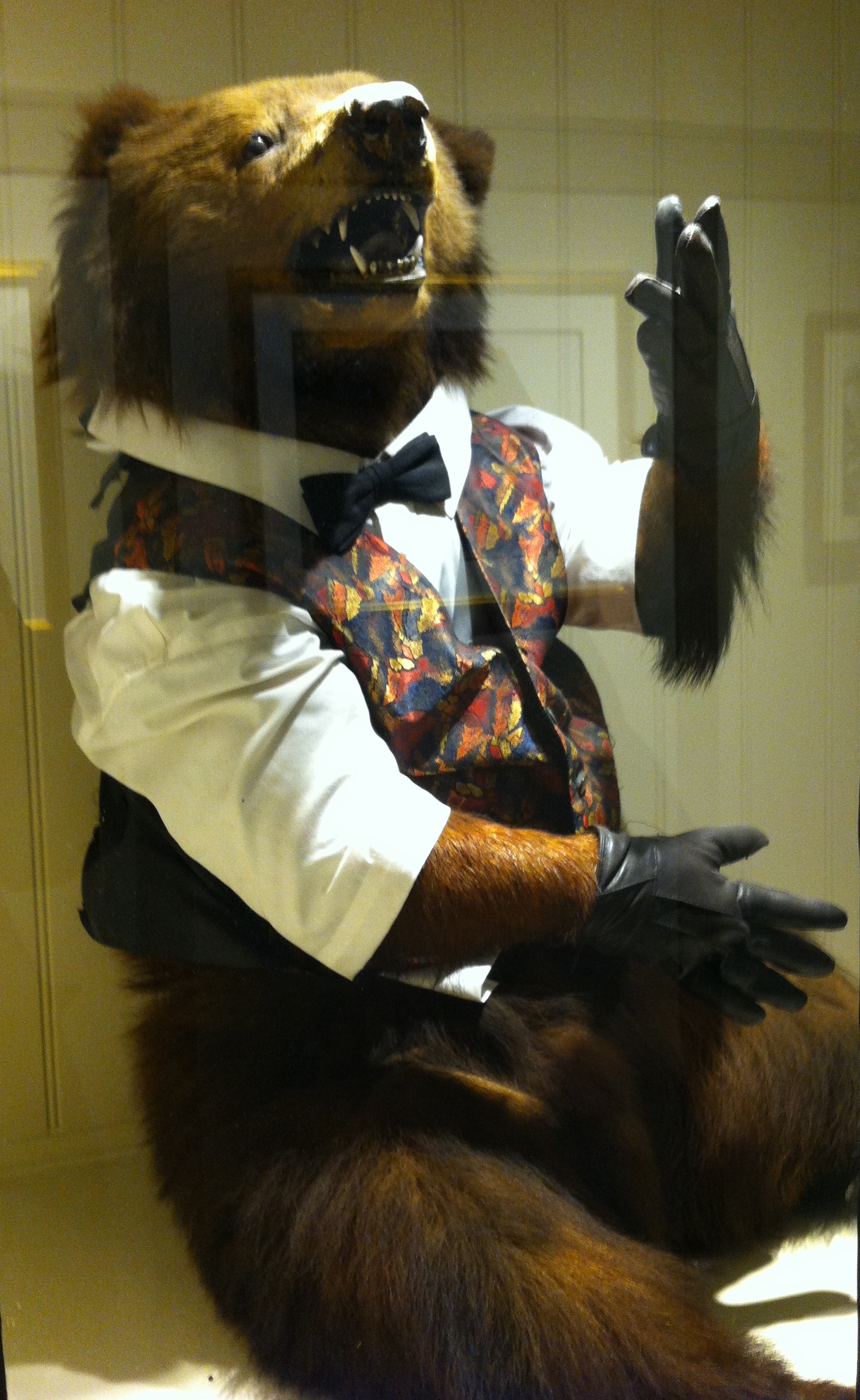 The historic stuffed bear in the display case now used for the "tavern" clock, 7th February 2014