This article was kindly provided by Dr Jimmy Whittaker, Feb 2021.

Did you know that the public phone box down the street is a listed building or, more precisely, a “Building of Special Architectural or Historic Interest”? By this, I refer to the telephone box on the Hungerford High Street just outside the Post Office Sorting Office.

This telephone box or kiosk is probably one of the three originals that existed in Hungerford in 1937 and had a phone number of Hungerford 107.

One of the other two boxes, situated by the St. John’s Mission Hall (full name The Mission Hall of St John the Baptist, Hungerford), stood on the east side of Salisbury Road, opposite Atherton Crescent, between 1899 and 1987 and had a phone number of Hungerford 139. The site is now re-developed as St. John's Court.

The other phone box was close to the Bear Corner outside what is now Great Grooms Antiques, Charnham Street and had a phone number of Hungerford 59.

In the 1970s and 80s, as public telephone boxes began to age, problems with vandalism and a failure to repair damage quickly resulted in the demise of the classic red telephone box. In 1985, a newly privatised BT announced sweeping changes to improve the condition of kiosks. There was a lot of experimentation with new designs to prevent vandalism, which resulted in many traditional telephone boxes being removed from our streets and sold off. The replacement boxes were less pleasing to the eye and had little design merit.

A few years ago , there was local concern that Hungerford’s only remaining red telephone kiosk on the High Street should be moved as it was a safety hazard, because it partially blocked motorists views when people stepped out from behind it in order to cross the road. However Hungerford Town Council’s Highways and Transport Committee Chairman, deputy mayor Rob Brookman, revealed it had been given ‘listed building’ status and was thus protected. Fortunately for historians about 2000 red telephone boxes of the original 35,000 have now been declared as listed buildings and remain in place.

These widely recognised red phone boxes have now become so popular that replicas are now commercially made and have been featured in TV programmes such as “I’m a Celebrity, get me out of here” and “The Dragon’s Den”. Twenty-four of these replica red K6 (as they were designated) telephone boxes were specially branded for the 2012 Heineken Cup Final between Leinster and Ulster at Twickenham Rugby Stadium. By the way Leinster won 42-14 points, their third victory in four years. 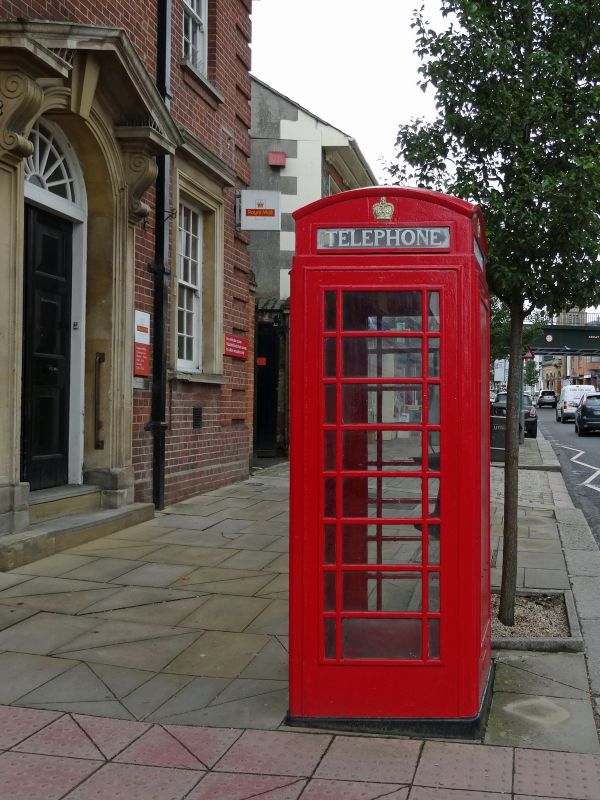 The K6 Telephone Kiosk outside the Crown Post Office Building.

In April 2021 BT offered Hungerford Town Council the opportunity to "adopt" the kiosk as it is to be de-commissioned. See "Historic red telephone boxes are up for 'sale'", NWN 29 Apr 2021.

The official record and description:

The History of the Classic British Red Telephone Boxes - The K2 to the K6:

The red telephone box was designed by Sir Giles Gilbert Scott (1880-1960) and, along with the red post box and the red London bus, is an instantly recognizable symbol of Britain.

A leading architect, Scott is famous not only for his telephone boxes. His achievements include producing the winning design for Liverpool Cathedral and overseeing the rebuilding work required at the Houses of Parliament after the Second World War.

The red K2 telephone box was introduced to the streets of London in 1926. It was used solely in the capital and only a few were erected elsewhere under special circumstances.

The K2 is both impressive and imposing, weighing over an imperial tonne. On top of the kiosk, on all four sides is the Royal crest of King George V formed from a series of holes to provide ventilation.

K2 telephone kiosks are older and larger than the more widely used K6 telephone box and are very rare.

Only about 1500 K2 kiosks were produced and only a few remain today.

In 1935 the K6 (kiosk number six) was designed to commemorate the Silver Jubilee of George V. It was consequently sometimes known as the "Jubilee" kiosk. It went into production in 1936. The K6 was the first red telephone kiosk to be extensively used outside London, and many thousands were deployed in virtually every town and city, replacing most of the existing kiosks and establishing thousands of new sites. In 1935 there had been 19,000 public telephones in the UK: by 1940, thanks to the K6, there were 35,000.

The design was again by Scott, and was essentially a smaller and more streamlined version of the K2, intended to be produced at a considerably cheaper cost, and to occupy less pavement space. The principal differences between the two designs were:

• Size. The K6 was 8 feet 3 inches (2.51 m) tall and weighed 13.5 cwt (0.69 tonnes). This compared with 9 feet 3 inches (2.82 m) and 1.25 tons (1.27 tonnes) for the K2.
• Elements of the design were simplified and streamlined, in keeping with the popularisation of the art deco aesthetics using bright colours and geometric shapes. The Grecian fluting was removed from the door and window surrounds, and the previously separate pediment and frieze were merged.
• The Crown motif which had previously been pierced through the ironwork to give ventilation, was now embossed in bas-relief. A new, separate ventilation slot was provided.
• A new glazing pattern was introduced. The door and two glazed sides of the K2 each had 18 equal-sized panes of glass arranged in 6 rows of 3. In the K6 the number of rows was increased to 8, and the central column of panes was made considerably wider than those to either side. This improved visibility, and gave a more horizontal appearance to the windows, again in keeping with the art deco principles.