You are in [People] [Clergy & Teachers] [St Lawrence]

St. Lawrence, patron saint of the Parish Church of Hungerford, was the Archdeacon of Rome in the middle of the third century, a time when Christians were being grievously persecuted. He was especially responsible for the treasures of the churches in the City. When the prefect of Rome called upon him to surrender them, he asked for three days grace. He then distributed the gold and silver in his care to the needy of the City, and on the third day he collected together all the poorest Christians, including the halt, maimed and the blind, and presenting them to the Prefect, said, "Here are the treasures of the Church of Christ". 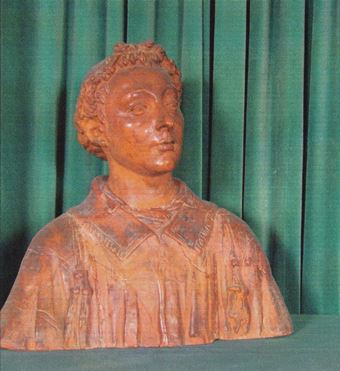 For this he was condemned to death and suffered martyrdom on the gridiron on 10 Aug AD258.

This bust is a plaster copy of that by Donatella in the Sacristy of the Church of San Lorenzo at Florence. Donatella (born 1386, died 1446) was one of the greatest sculptors of medieval Italy. His "St. Lawrence" was made about 1440.

The bust was present to the Church of St. Lawrence, Stratford sub Sarum in 1958, and was dedicated on the 1700th anniversary of the martyrdom of the Saint.