You are in [Themes] [Buried in Woollen] 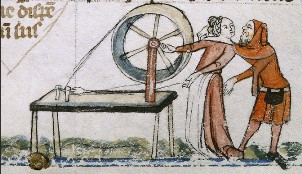 In the late 17th century, Acts were introduced requiring the dead to be "Buried in Woollen".

During the 14th, 15th and early 16th century woollen cloth produced in southern England was exported widely to northern Europe. The huge scale of the woollen industry gave rise to much wealth and prosperity - and to many of the wonderful "woollen churches", including Newbury, St Nicholas Church.

The 16th century saw a change in fashion as linen, satin and silk became more readily available, while the demand for woollen cloth dropped away.

The wool industry was in decline, and measures were needed to increase demand, improve the quality of the woollen cloth and encourage the development and production of new textiles. Specialist workers were welcomed into the country for their expertise, but the introduction of new materials and foreign imports threatened the home woollen industry.

Many people became worried about the future, and some of these sat in Parliament as members whose constituencies were in the woollen cloth and yarn producing areas, or as landowners whose incomes came from rents paid by tenants whose living relied on wool and sheep.

They combined together to pass an Act to try and maintain the demand for domestically produced wool.

The Act required that when a corpse was buried it should only be dressed in a shroud or garments made of wool:

"No corpse of any person (except those who shall die of the plague) shall be buried in any shift, sheet, or shroud, or anything whatsoever made or mingled with flax, hemp, silk, hair, gold, or silver, or in any stuff, or thing, other than what is made of sheep's wool only."

Exceptions were made for plague victims and the destitute.

Failure to comply resulted in a £5 forfeiture. One-half of this went to the informer, the other half to poor of the parish where the body was buried.

Within eight days of the burial, an affidavit had to be provided attesting that the burial complied with the Act. The affidavit had to be sworn in front of a Justice of the Peace or Mayor by two creditable persons. If the parish did not have a JP or Mayor, the parson, vicar or curate could administer the oath.

In practice, the affidavit would often be sworn at the same time as the burial and certified by the officiating priest. 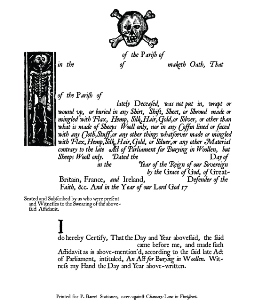 These affidavits took various forms. Some appear in the parish registers, others as a separate register, and some on a specially printed form. Affidavits do survive in this form in the archives, but many were thrown loose in the bottom of the parish chest and subsequently destroyed.

This Act was obviously unpopular with many people as they wanted to buried in their finery as opposed to a cheaper garment or shroud in an off-white colour and of very thin material.

Gradually the legislation came to be ignored. Many were prepared to pay the £5, rather than "be seen dead in wool". Often a member of the family would become an informer so that in effect only half of the fine would be paid.

Burial in wool fell from use c1770, and the Act was no longer enforced after 1814, although it was only finally repealed by the Statute Law Revision Act 1863.